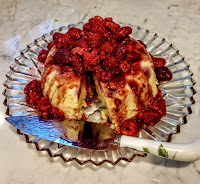 I'm so excited about learning to make steamed fruit pudding, which are cake-like desserts poured into a mold, covered and then steamed in a boiling water bath on top of the stove. The process is ancient and started as a savory food preparation that was stuffed into an animal stomach or intestine and then boiled. "Black pudding" (blood sausage) is an early iteration of a pudding. As modern sugar production started in the 18th century and made sugar accessible to the average consumer, sweet fruit puddings developed.

British puddings are nothing like American chocolate or vanilla pudding, which are related to custard.  The batter for puddings have a higher egg to flour ratio than cake and the resulting texture is reminiscent of firm bread pudding. I'm psyched about how beautiful this one looked, but compared to some of the puddings I've seen on the Great British Baking Show this one is elementary.

Thank goodness for my friend Norma, who explained that a "pudding basin," is basically a 2 quart heat proof glass mixing bowl. Via Facebook messenger she guided me through the process of creating this incredible dessert. The recipe is a modification of an steamed apple pudding from the British food bloggers, Hairy Bikers' and the BBC food website.

The process of greasing the glass mixing bowl, mixing the batter , covering the uncooked batter and steaming takes a bit over 2 hours, most of which time the pudding is steaming.

Raspberry compote:
Blackberries or Blueberries can be substituted
Procedure: 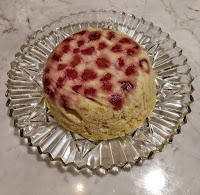 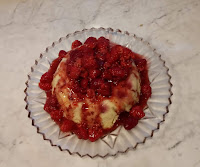 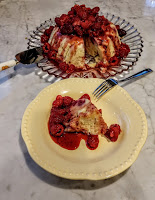 Posted by Bread and Babka at 8:50 PM No comments: