Potatonik , a cross between a kugel and yeast bread, is ordinarily made with white potatoes and onion. This recipe is inspired by George Greenstein's recipe that can be found on this blog: Potatonik ,as well as in Greenstein's baking book, Secrets of a Jewish Baker , a great book whose biggest draw-back is the lack of useful pictures.


Potatonik employs both yeast and baking powder as the leaving agents. The resulting texture is chewy and soft. Greenstein's "secret" in this recipe is the use of a "sponge" (pre-ferment starter). His instructions direct a 30 minute pre-ferment, but I've left the sponge to rise for up to 6 hours with no compromise in the final product. Mixing, baking and cooling the dough will take less than 2 hours (one hour of which is passive baking time).


Procedure:
1. Weigh/measure ingredients to make the sponge. Mix well with a large spoon. Cover with plastic wrap and set aside in a draft-free spot to rise. 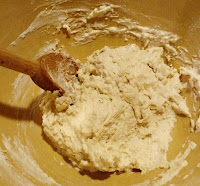 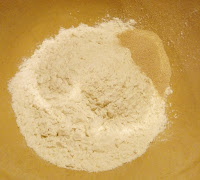 2. Weigh/measure ingredients for the dough.  Mix the baking powder, pepper, salt and breadcrumbs into the flour . Preheat the oven to 375 degrees. 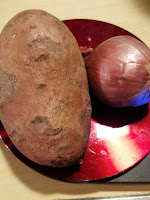 3. Stir down the sponge (pre-ferment). Mix in the sweet potatoes and shallots. Use a flexible scraper to aid in the mixing. The vegetables should be completely incorporated. 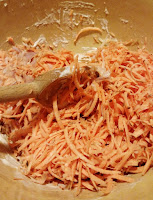 4. Stir in the flour mixture and oil into the pre-ferment/ vegetable mixture. Mix and turn well. The dough will be sticky and on the loose side. 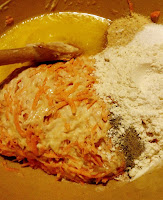 5. Push 1/2 of the dough into a prepared pan, and the remainder into the second pan. 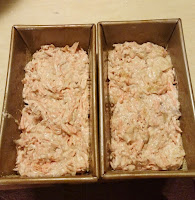 6. Place in the center rack of the oven. Lower the heat to 365 degrees and bake for approximtely 1 hour. The top should be golden.  If your oven is uneven, turn the pans 45 degrees after 40 minutes. To overcome hot/cool spots in my oven I keep a ceramic baking tile in my oven. The pans can rest directly on the tile.

7. Cool for 10-15 minutes. Turn out of pan and allow to stand for a few minutes. Slice and serve immediately or at room temperature.

The baked potatonik can be wrapped and kept in the refrigerator for 2-3 days; otherwise, double wrap and freeze.