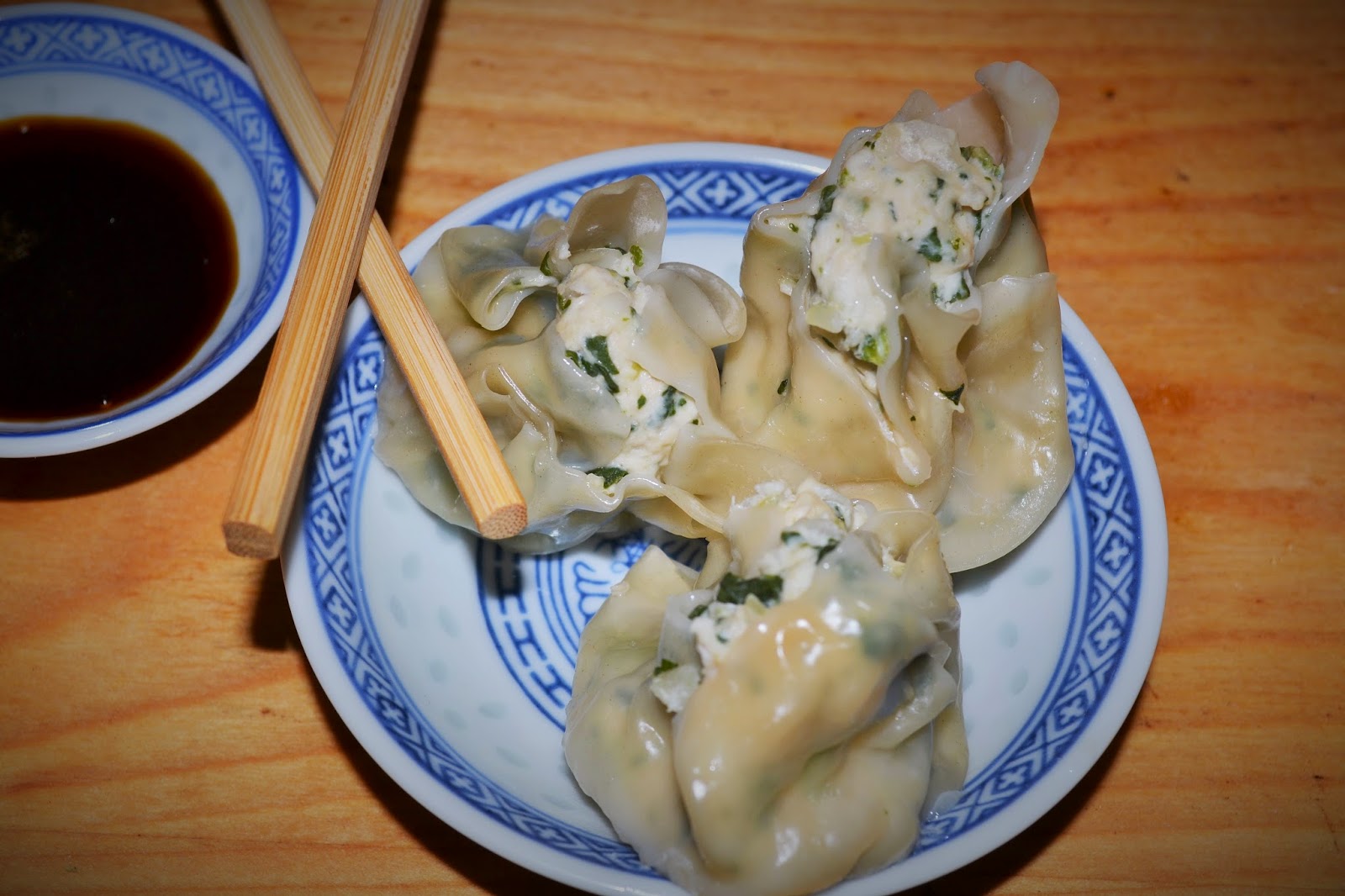 Our family loves dumplings of all sorts. At their most basic, dumplings are dough wrapped around a filling. Easy enough, right? The filling reflect everything imaginable and represent the flavors of every culture.  I grew up on cheese and potato blintzes (also think: pirogi or vareniki), but I recently expanded the filling potential by wrapping the dough around pastrami and corned beef hash . Other Eastern European Jewish-style dumplings include meat kreplach (see my vegetarian variation) or knishes .  Asian steamed buns are made wheat dough with a leavening agent (see Asian style steamed buns) and in the Middle East and Muslim influenced cultures wrappers are usually wheat and oil based (Samsa  or sambusak).  Savory and sweet, the variety and variations of dumplings are endless.

Whenever I made dumplings guests think of them as a complicated treat; however, they really are, at their root, a comfort food and can be prepared at home. They do take a bit of time to make - I would imagine that historically dumplings may have been traditionally prepared as a community project- but given a bit of background music, a radio playing or your favorite tv show, you can sit down and knock them out.  Many can be frozen (I freeze my kreplach and blintzes as well as strudel rolls) and most will hold up in your fridge for several days when you wrap them well (the steamed chicken dumplings in the photos were wrapped, kept in my fridge and used over 4 days during the current fall holidays).

If you're still interested, but not convinced about how doable dumplings are to make, there are shortcuts including ready-made wrappers. You can purchase pre-made won ton and dim sum wrappers (square or round) in most supermarkets or Asian grocery stores.  In Middle Eastern or kosher food stores you should be able to find frozen puff pastry that you can use for a variety of dumplings. Greek style frozen sheets of filo (phyllo) dough are ubiquitous. Most of the time, except for dough requiring yeast or leavening, I opt for ready-made wrappers.

I learned to make steamed dumplings in Manila from both Filipino and Chinese-Filipino friends. Siomai (the Filipino variant of Chinese Shao Mai) is a much loved food - you can find them served at parties, sold by street vendors and in fast food places. The most common filling is made with ground or minced pork, dried or fresh shrimp and mushrooms. When I first started making them I opted to use ground veal as the "pork substitute," however, our daughter stopped eating veal many years ago so I started to experiment with other ingredients including vegetables, mushrooms and as in these dumplings, ground chicken with a complimentary vegetable (spinach).  Water-chestnuts are often used as a filler, extending the filling and improving the consistency.

I've treated myself to a bamboo steamer and wok, but you can create a steamer by using a covered saucepan with a metal vegetable steaming grid.  The trick is to not allow the boiling water to touch the food itself. 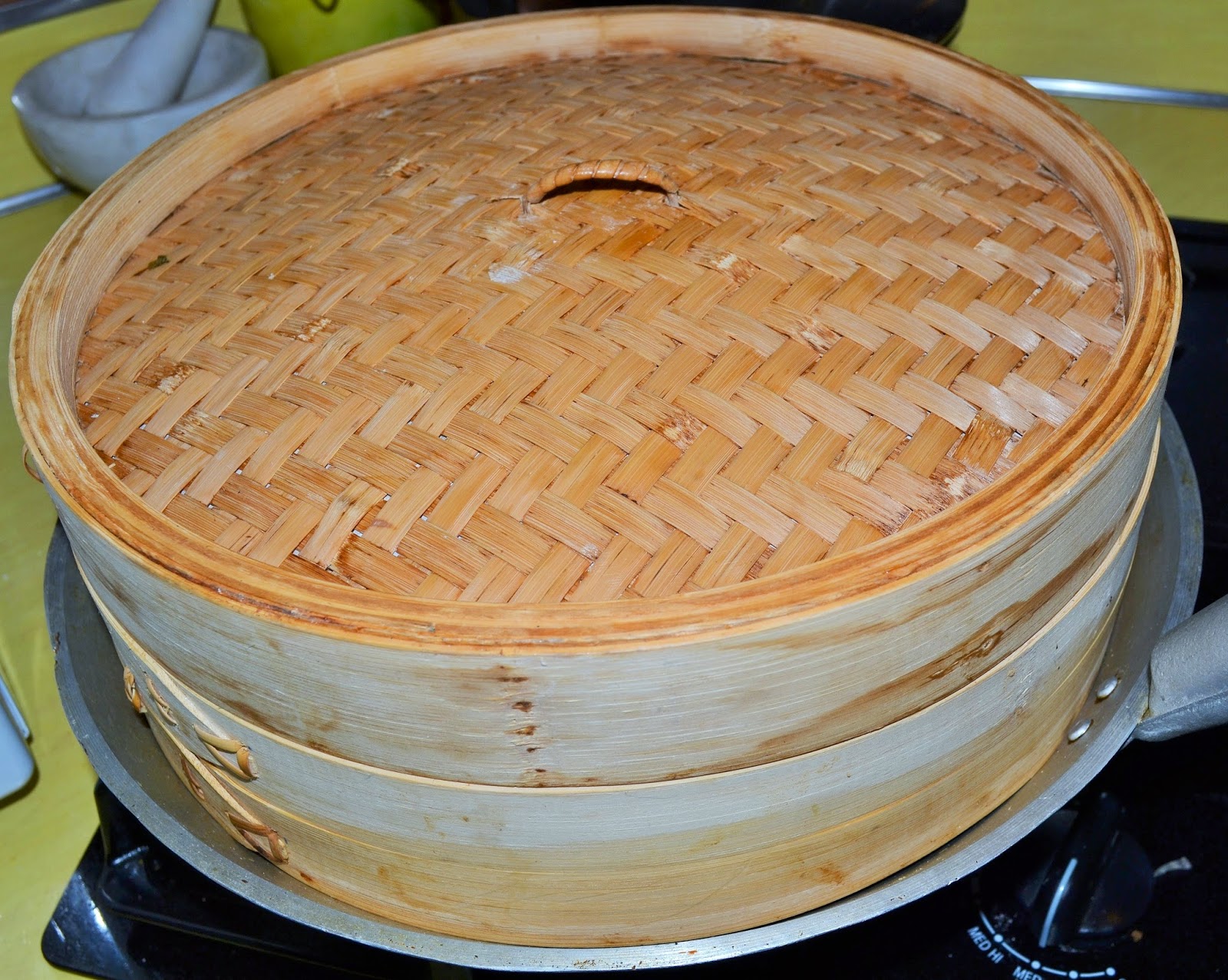 Choreography:
Dumplings are made in three stages: filling, dough/wrapper (if you are making it) and assembly/cooking. You can make the filling, cover and chill it and come back to the dough and assembly hours later.

Give yourself a clear space to work, I usually lay a table cloth across part of my dining room table and give myself plenty of elbow room.

I assemble enough to fill the steamer basket, put that batch over the water, cover and make another batch as the first one cooks. When you have the rhythm the entire process is fairly efficient.

Equipment:
measuring spoons, cups
cutting board and sharp knife
mixing bowls
steamer and wok (alternatively a large saucepan and metal steaming rack)
parchment paper (cut into small pieces to fit the inside of the steamer)

For the wrapper:
1 package (50 count) won ton (square) or dim sum (round) wrappers

1. Bring a pot of water to a boil. While the water is heating, make the filling
2. Dice the water chestnuts, scallions and garlic
3. Mix all filling ingredients together. Make sure that the cornstarch is not lumpy 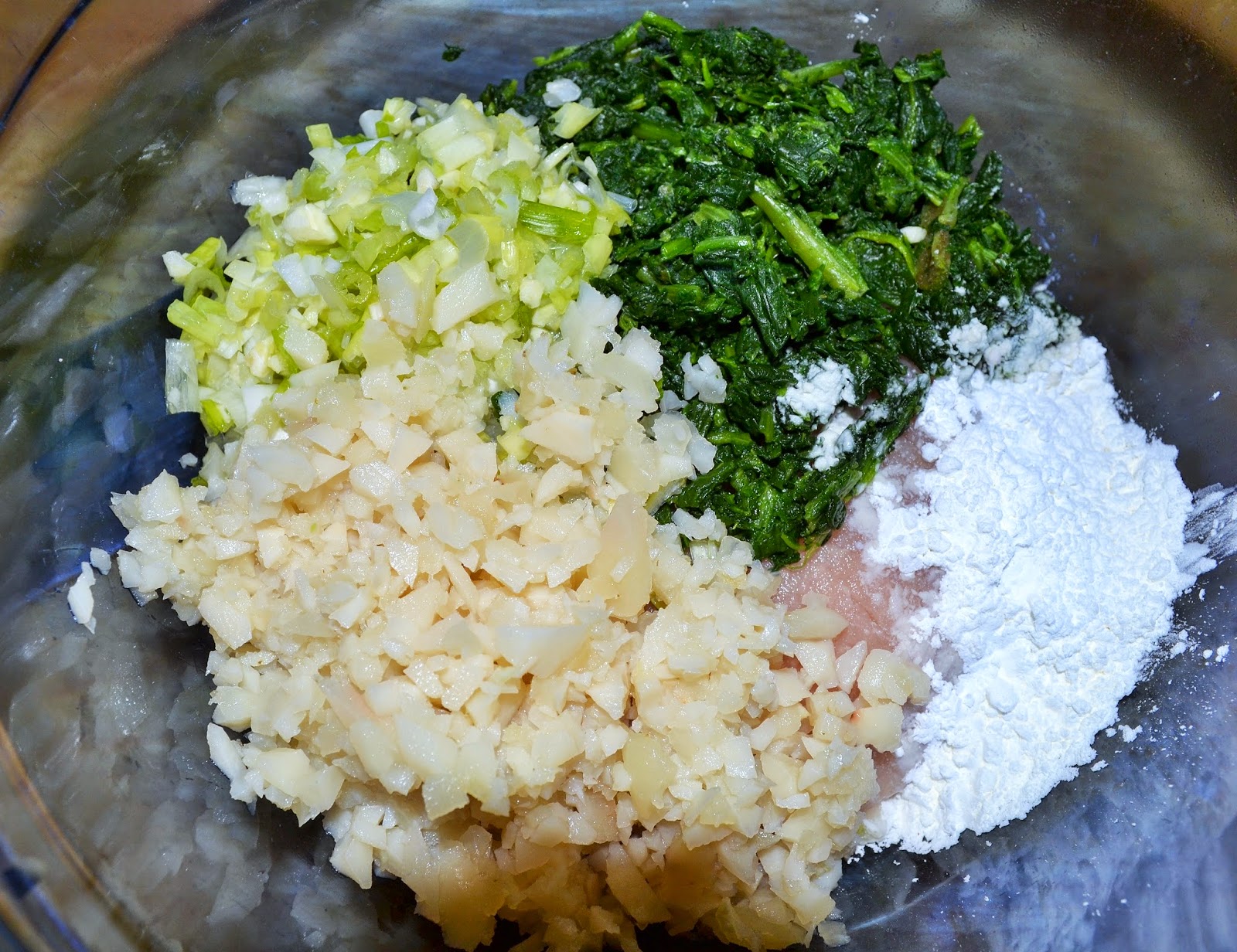 4. Line the steamer with a piece of parchment paper

6. The flavoring are all measured in ranges and in order to make sure that the salt and spices are in balance I like to steam 1 or 2 dumplings to check the taste.  Testing a dumpling will also help you evaluate whether or not you have added enough cornstarch: the meat should hold its shape, the dumpling wrapper should stay tightly around the filling after steaming. Steam your "test" dumplings for 12 -15 minutes. Cool for a few minutes and either taste it or find yourself a taste tester (this is never a  problem in our house) 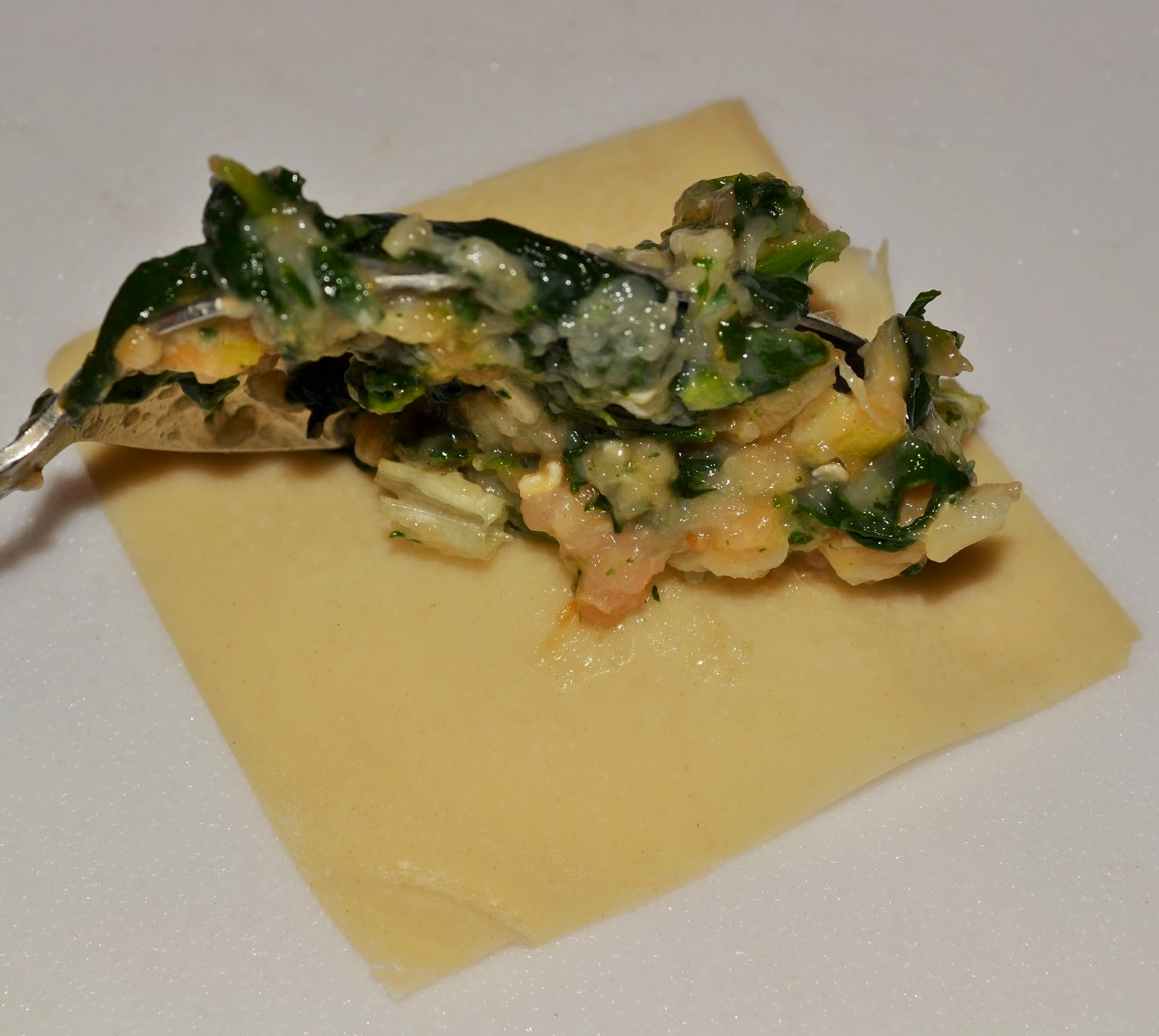 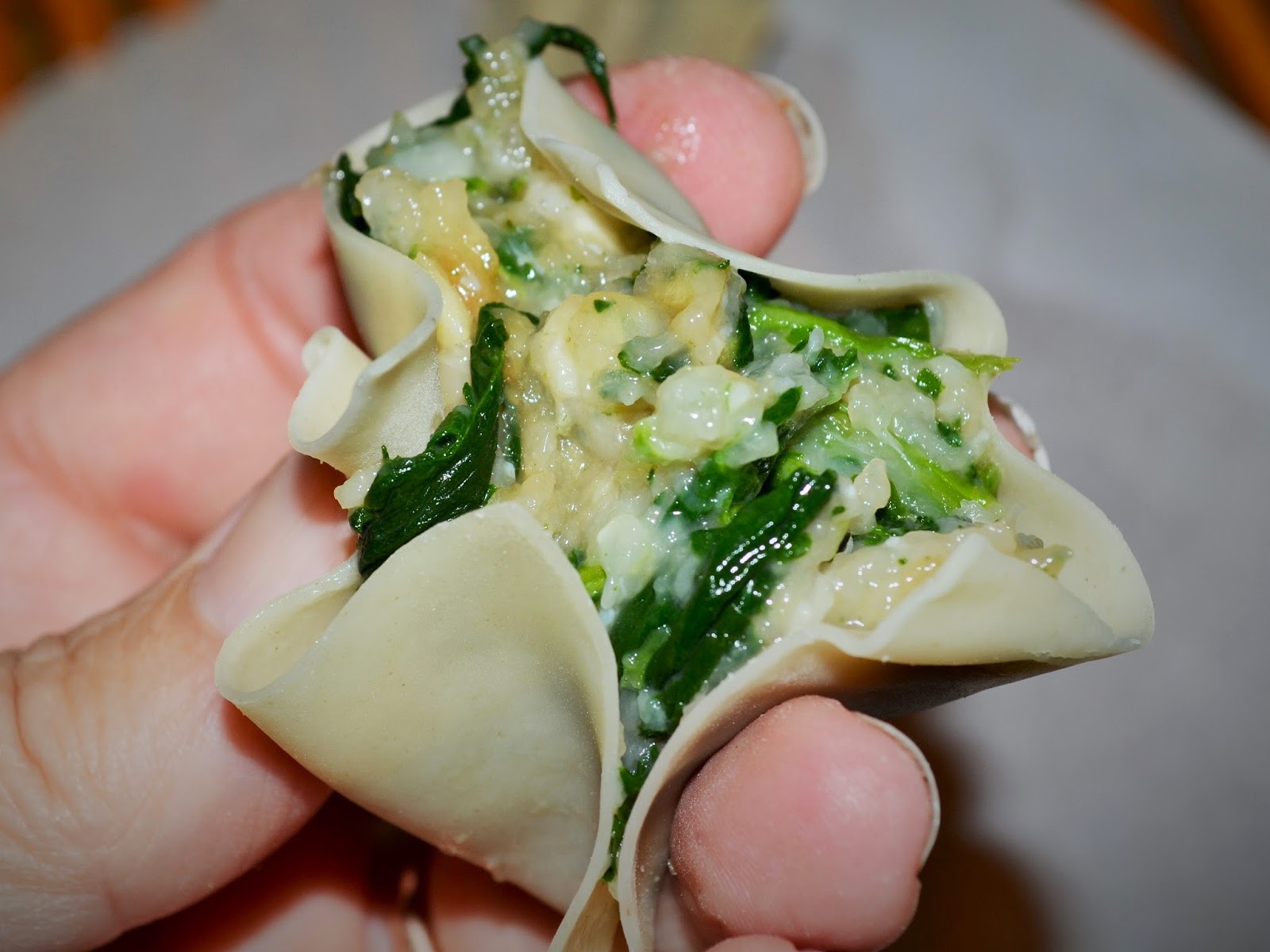 7. Continue to make dumplings and steam the batch for 12-15 minutes. Once finished, remove the steamer from the pot, remove the dumplings (it's a balancing act to remove the entire piece of parchment, you can either lift the paper or lift dumplings one at a time). If you are using a bamboo steamer, use one tier at a time and be careful - steam burns are unpleasant 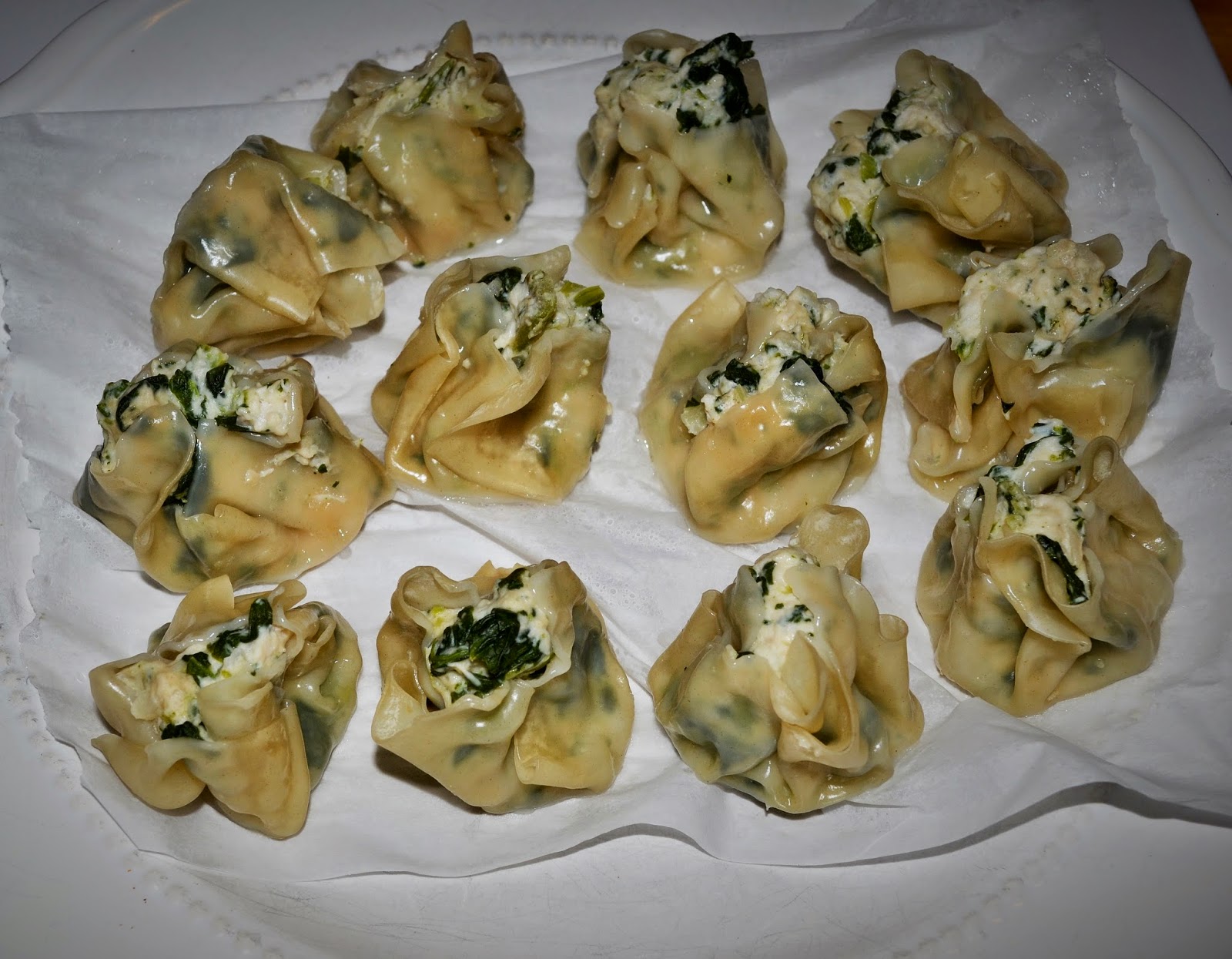 Serve warm or at room temperature. Serve with your choice of soy sauce based sauce (soy sauce, teriyaki, "Mr Yoshido," General Tso, etc.  A squeeze of lemon or "calamansi" (also called calamondin) in the sauce is really delicious. 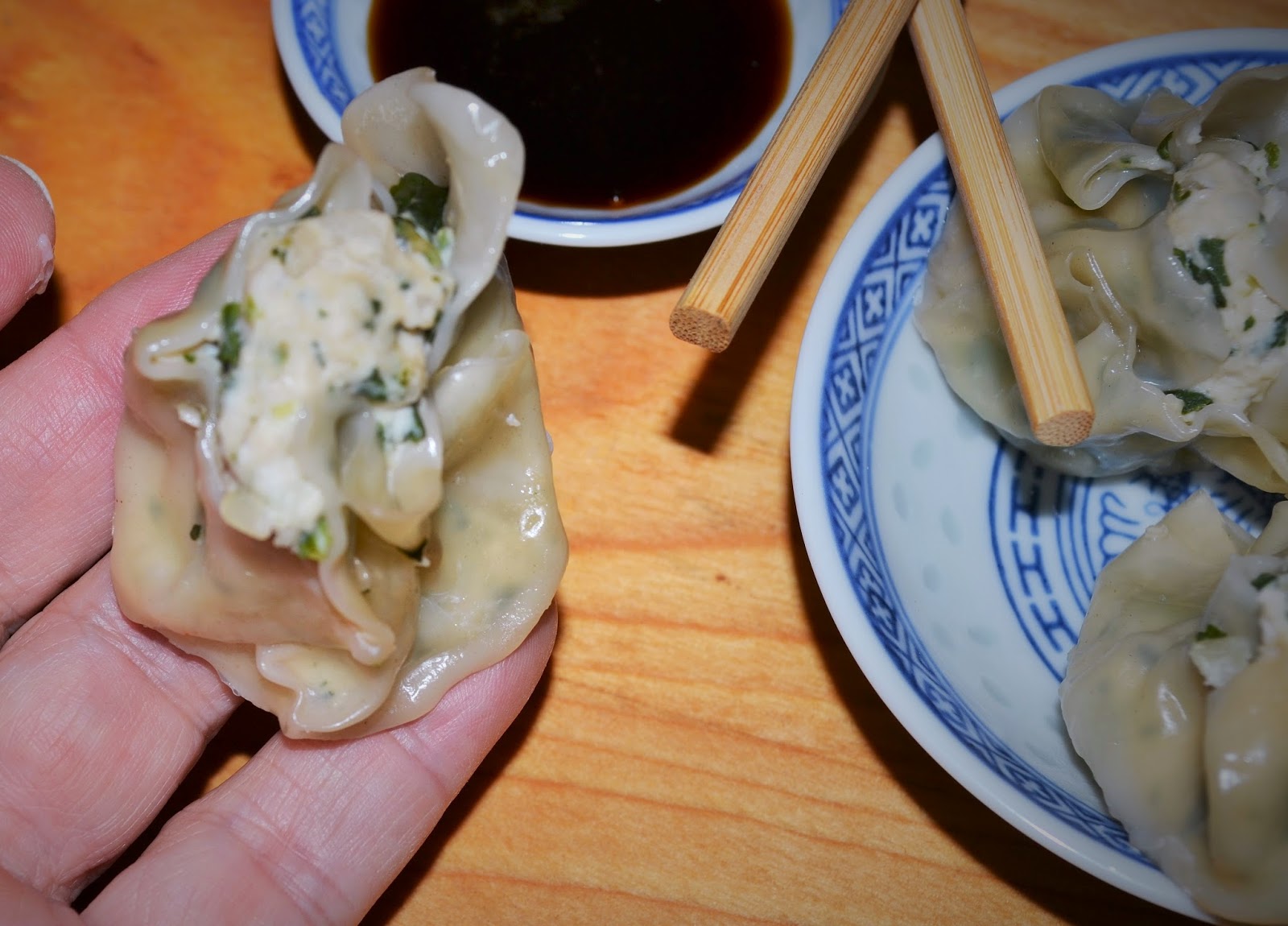 
What was I uploading on my blog a year ago?
Thanksgiving Sweet Potato Dinner Rolls - take a look!