Baked Knishes made with potato-flour dough

(various fillings including meat and/or vegetables) 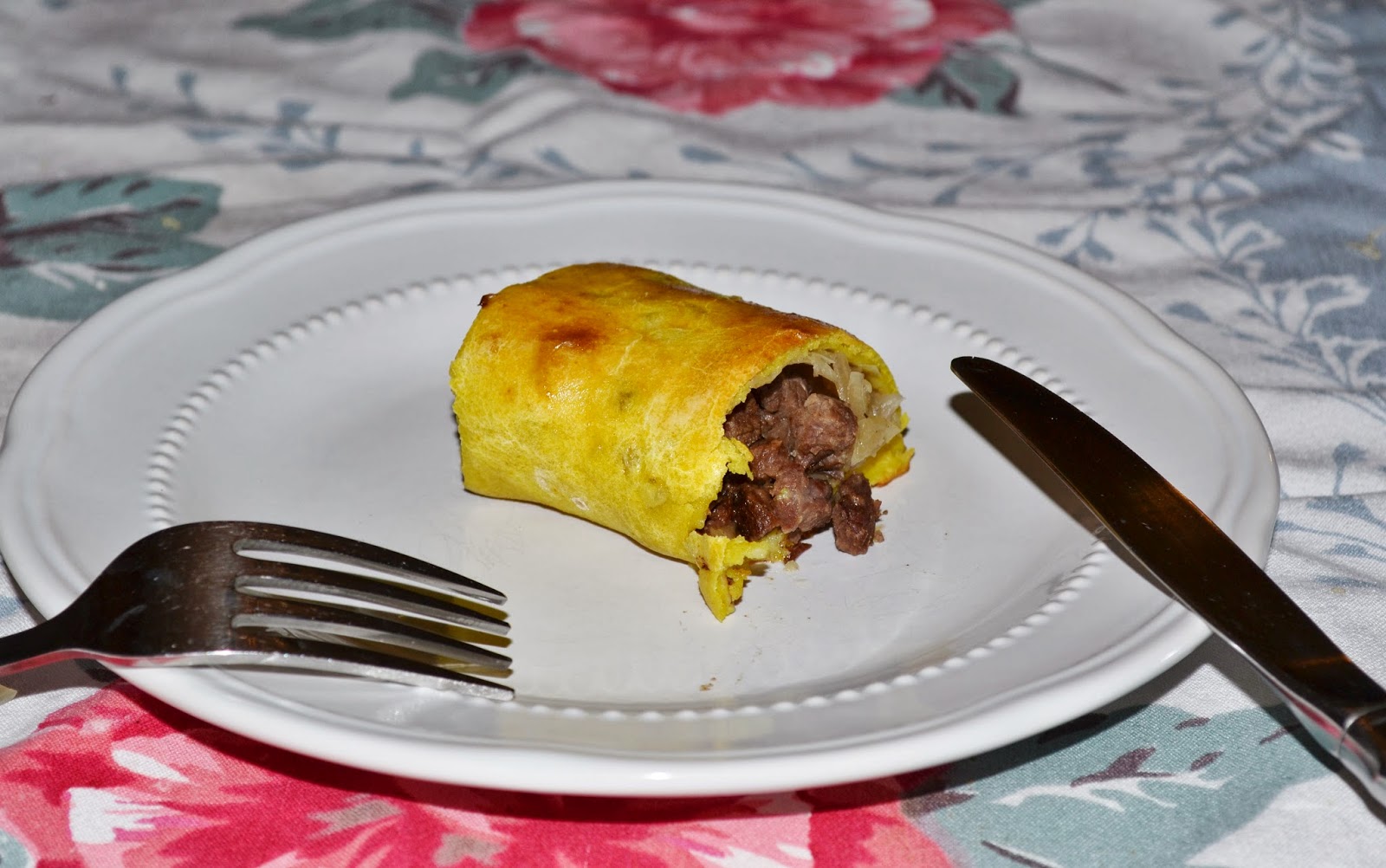 Knishes are of Eastern European origin but are ubiquitous in the American-Jewish world. Growing up in New York City we could purchase them hot from Kosher delis or sometimes, in the "old neighborhoods" from street vendors. I remember them being described as "square" or "round."  An old time knish bakery, Yonah Schimmel's still exists on the Lower East Side of Manhattan. In Brooklyn there was a knish store on Flatlands Avenue that had, what seemed at the time, an unlimited variety of knishes filled with potato, fruit and cheese fillings. Gabila's, which makes a fried dough type knish is available in many supermarkets; Gabila's knishes are made from a thick dough unlike the home-made type.

Knish is also a Yiddish slang word.....I won't go into that here, you can look it up on the Internet.

The decision to give making knishes a try came up during a conversation about Fred's grandmother and her early attempts at knish making. Her sister-in-law, Aunt Debrusey, shared the recipe with Fred's grandmother; however, Debrusey sabotaged (perhaps inadvertently?) the initial attempt when she shared the recipe. Since we all know people who share recipes while leaving out a key ingredient or technique the story hit me as link to a well-entrenched family customs of specific family members in all families. "Boil potatoes," Debrusey said, "then mash them and add flour."  Fred's grandmother asked, "How much flour?"  Debrusey responded, "As much as they will take," neglecting to mention to cool the potatoes, first.   Fred's grandmother proceeded to mash hot boiled potatoes and continued to add flour as the hot potatoes absorbed an enormous amount of flour to result in an unusable dough, if, at that point, it could be called that. The dough wasn't right because the key point that Aunt Debrusey didn't communicate was to mash and COOL the potatoes completely before adding the flour.  There was also a story of a chocolate cake recipe which flowed out of the oven, but that is for another time. Anyway, Fred has memories of eating his grandmother's knishes, so she eventually worked out the details, although the recipe is lost. She made her knishes as individual round pastries, I opted for a time saving technique - rolling the dough into rectangles, filling and forming 12-14 inch logs that are baked and then cut into individual knishes.

According to Gil Marks, the food historian and cookbook author, knishes evolved from simple fried patties made with kasha and/or mashed turnips. A simple dough of mashed root vegetables may have encased a filling.  When the potato reached Eastern Europe, it quickly became the favorite filling and the dough evolved to make use of flour that allowed for stretching and rolling out, thus increasing the ratio of filling to dough. Late 19th century Eastern European immigrants brought a knish making tradition with them to America (and I would imagine elsewhere); knishes were sold as street food on the Lower East Side of Manhattan in immigrant neighborhoods of Brooklyn.

Depending on where a dough recipe originated there are subtle differences that probably relate to available ingredients.  According to Marks, "Litvak" type dough often combines mashed potato and flour. The knish recipe that follows uses this type of dough. The dough is easy to make and handle.  Knishes are usually served as a side dish; however, I made the pictured knishes with a cabbage and meat filling, serving them as the main course served with a warm vegetable dish. 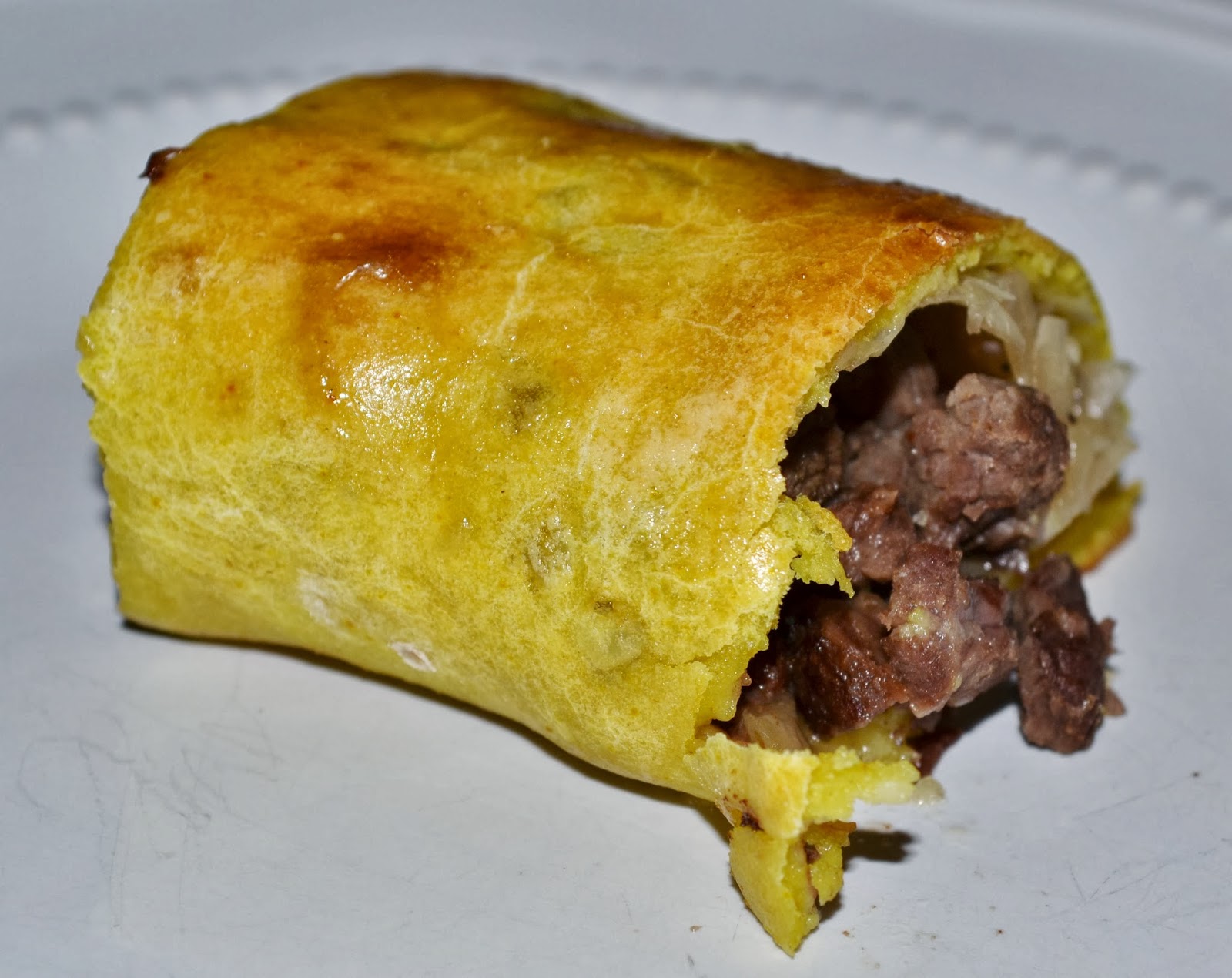 Choreography:
The initial preparation of the dough and filling should be made ahead of time, the dough should chill at least for an hour and up to the better part of a day. The filling needs to be cooked and cooled. I did both at the same time and came back to assemble and bake several hours later. The assembly, which requires rolling out the chilled dough, filling, rolling up and baking will take a bit over an hour (this includes the 40 minute baking).  Cool for 5-10 minutes before slicing the baked logs into slices. Cooled logs can be well wrapped in foil and then placed in an airtight container or plastic zip lock bag and frozen.  When defrosting, open the bag, unwrap and defrost on a flat surface. Re-warm in a moderate oven for a few minutes.

Procedure:
Dough:
1. Peel and boil potatoes. Mash very well, measure 2 packed cups. Add salt and shortening or margarine to hot mashed potatoes, mix and allow to cool.
2. Combine cooled potatoes with eggs and turmeric. Mix vigorously.
3. Mix in flour and work it into the potato-egg mixture.
4. Lightly grease a bowl, add the dough and turn so that the surface is lightly greased.
5. Cover the dough with plastic wrap and chill for 1-8 hours.

Assembly:
1. Line 2 baking pans with parchment paper, preheat oven to 370 degrees.
Remove the chilled dough from the refrigerator. Divide the dough into 4 or 5 pieces.
2. Flour a work surface and roll out one piece of dough to a rectangle, approximately 12 inches by 5 inches.
3. Add filling along the long edge and roll securely. Move to the prepared baking sheet. 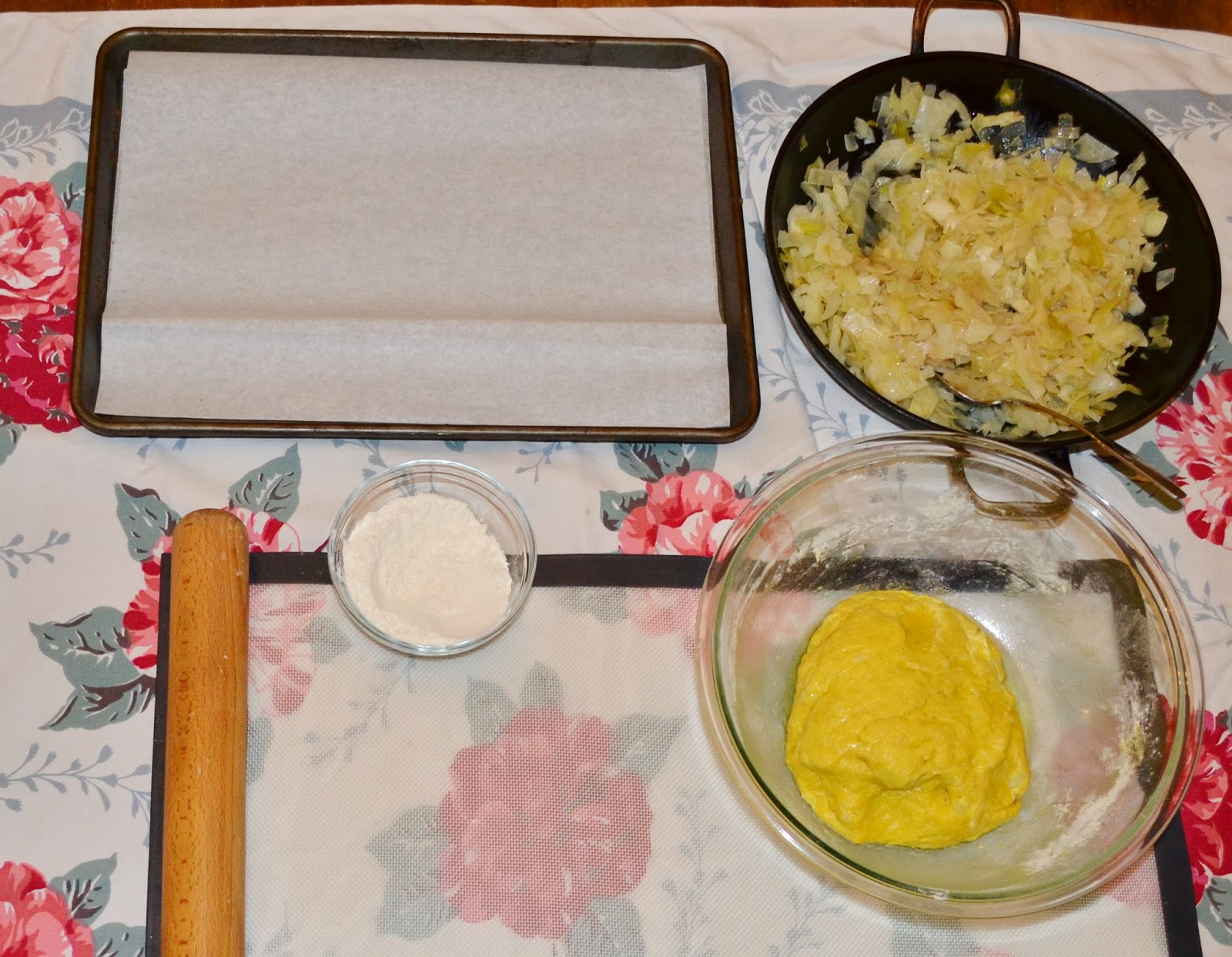 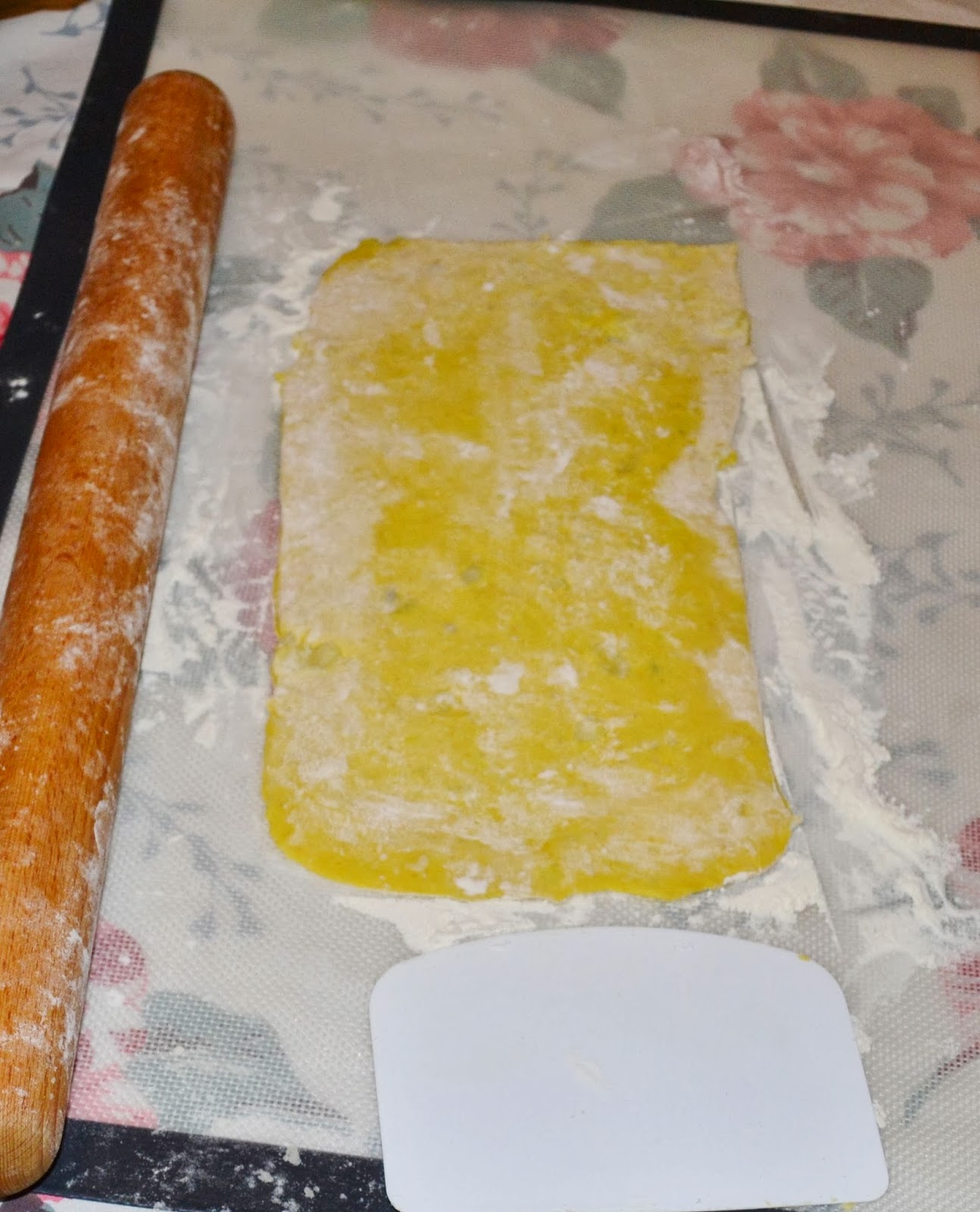 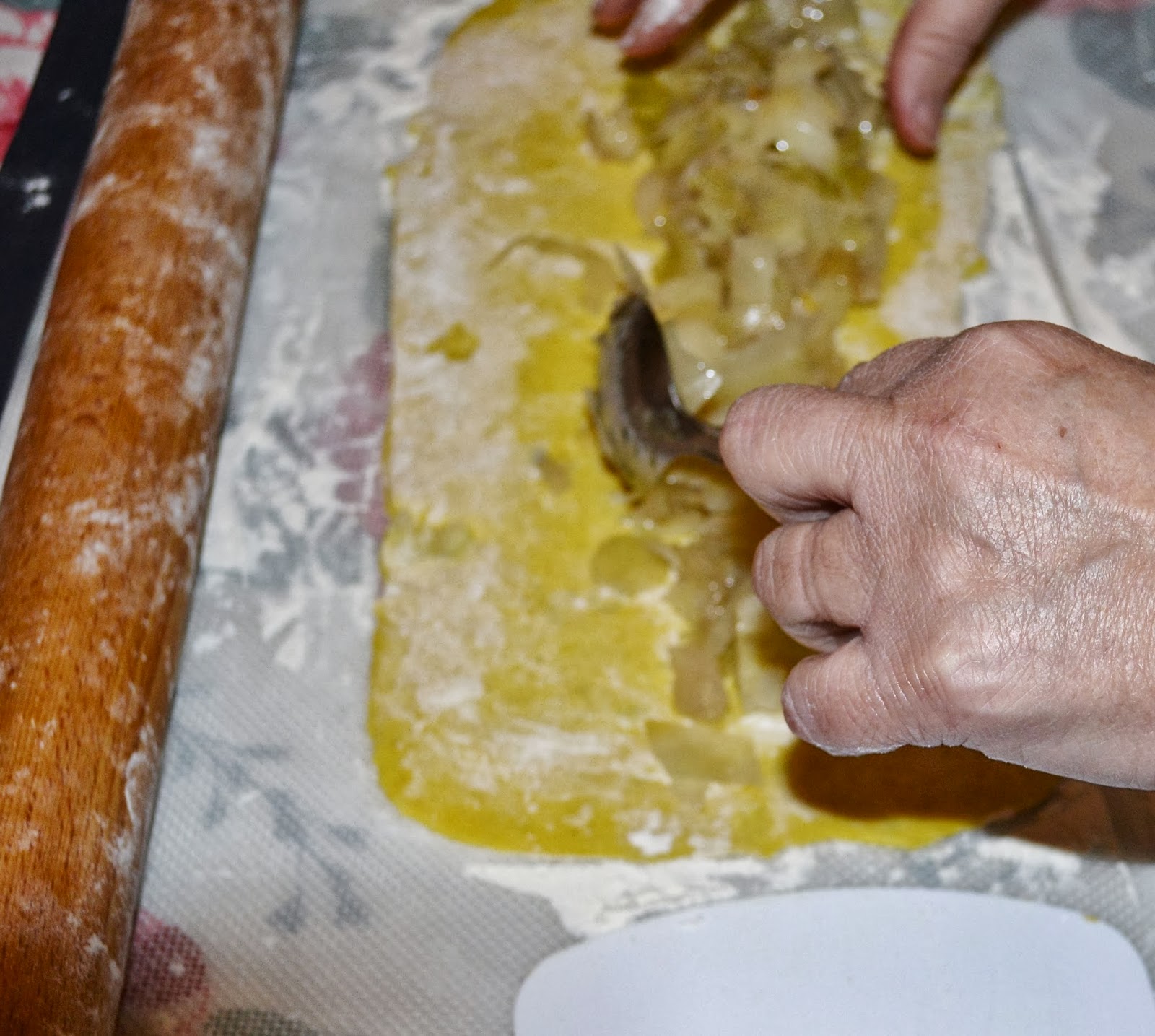 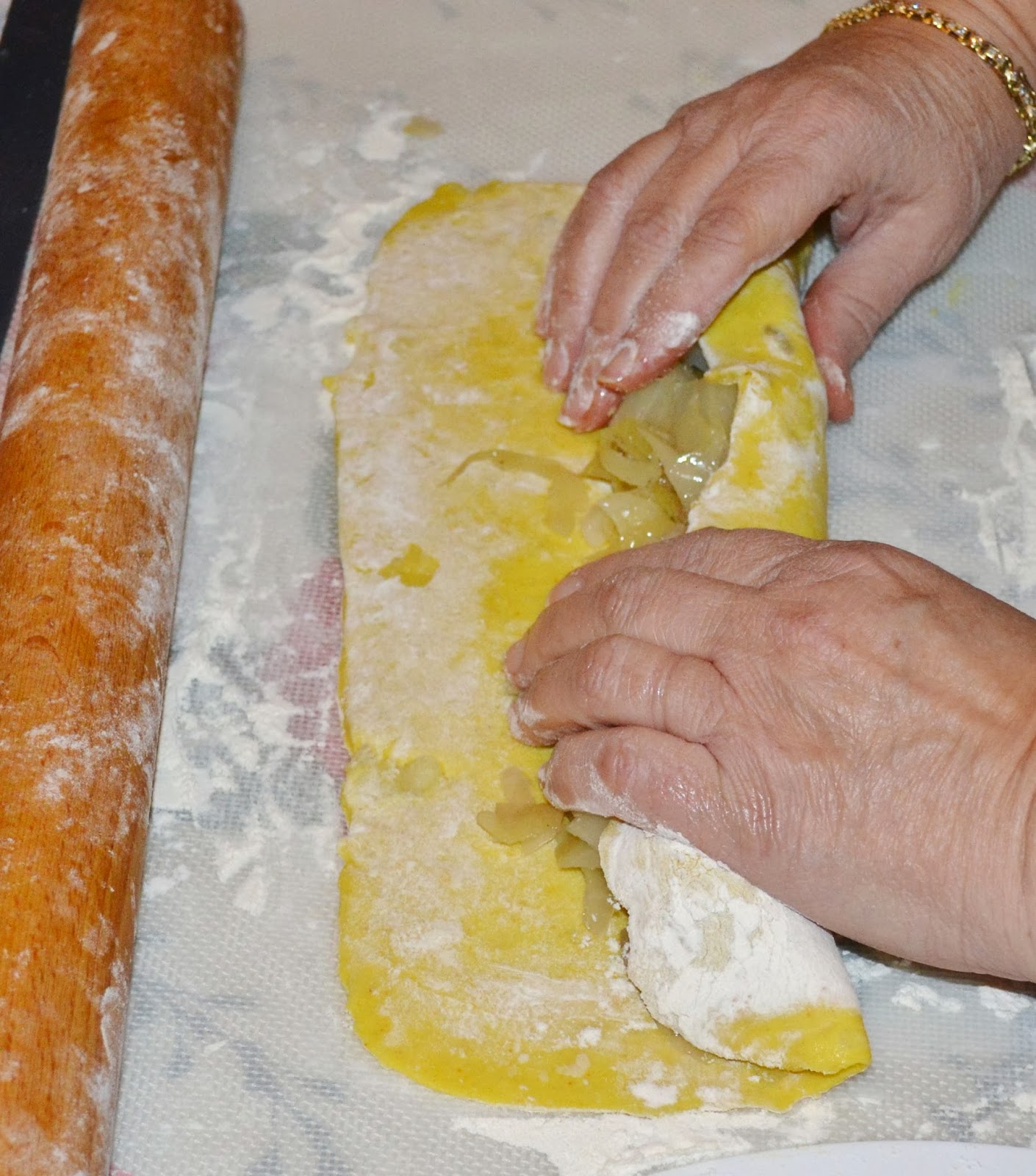 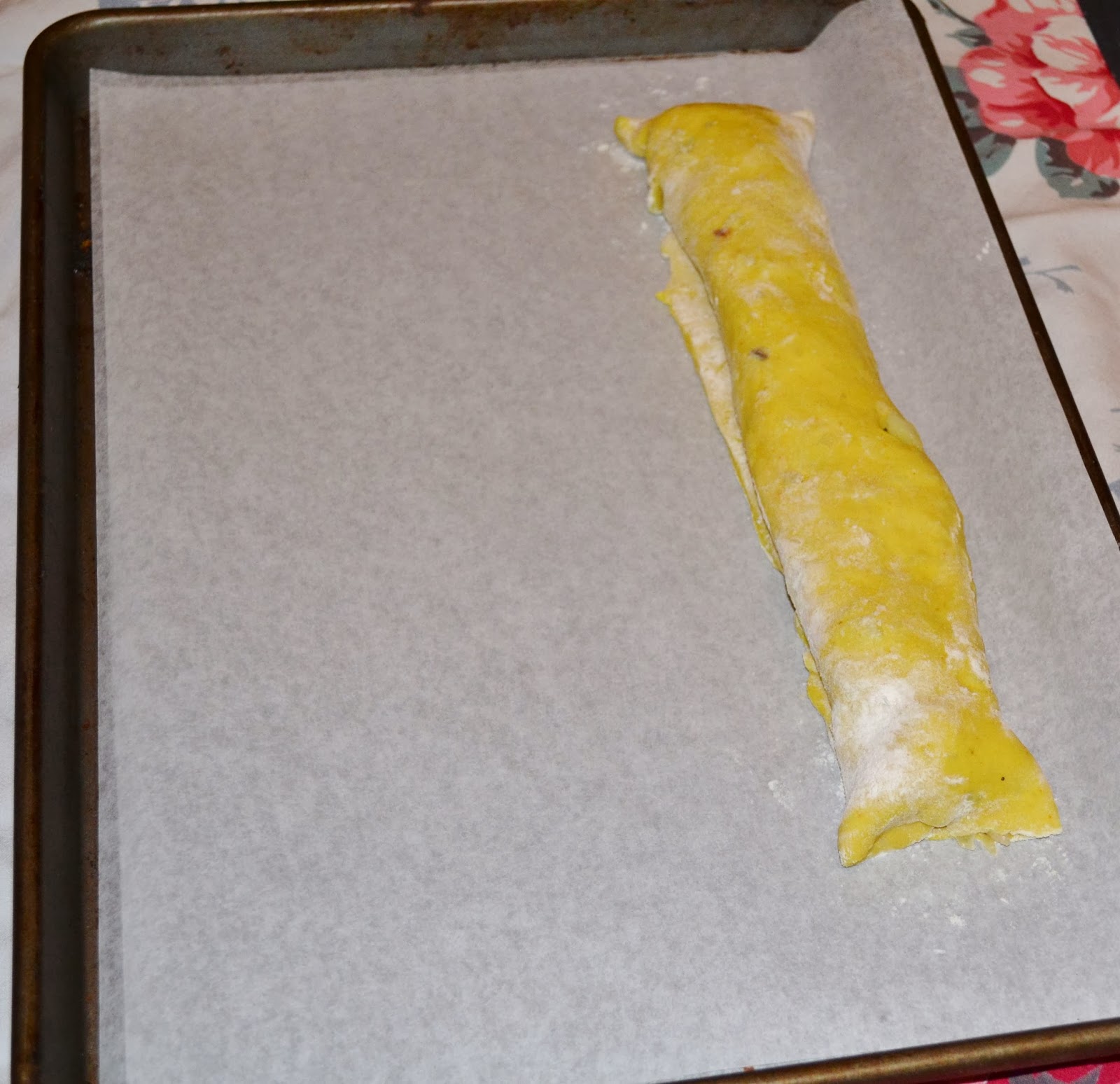 4. If you are adding meat to the cabbage filling, sprinkle the meat on top of the cabbage before rolling up the dough.

7. Cool 5-10 minutes so that filling can set. Cut each roll into six portions if you are serving. See instructions above for freezing if not using within 2-3 days.