This vegetarian version of a holiday favorite is delicious in soup or served as a first course with a pureed vegetable sauce.

Kreplach, a triangle shaped dumpling, is holiday favorite in Jewish homes of Ashkenazi (Eastern European) heritage. Cookbooks often comment that it's traditional to serve kreplach for Yom Kippur, although in our family kreplach is always on the Rosh Hashanah menu as well (why wait for a dinner that is often rushed while people are hurrying to get to synagogue?).

The usual filling is beef or ground/minced chicken and although filling recipes are similar there are subtle differences depending on where the recipe originated. There are cheese variations of kreplach, related to varenikes (Ukrainian) and pierogi (Polish) variations of filled dumplings.

My grandmother (whose family came from Lithuania) made her kreplach with raw ground beef (the tradition I follow); however,  my friend Susan's mom, who emigrated from Poland, made her kreplach with finely diced cooked brisket. My grandmother, at some point, became "modern" and added ketchup to the meat mixture (I continue her tradition). Food historians have traced the evolution of kreplach back to the middle ages when filled dumpling recipes emanating from China made their way along the silk road toward the Middle East and Europe. Kabbalists (Jewish mystics) and Hasidim have attached esoteric meaning to the process of making filled dumplings.

We have friends who are vegetarians, and for years we've served both chicken and vegetarian vegetable soup at the holiday table. I never, however accommodated the vegetarians with kreplach - they "made do" with matzah balls.  This year I have a surprise for them....a really delicious vegetarian version made with mushrooms, sweet potato and onion. 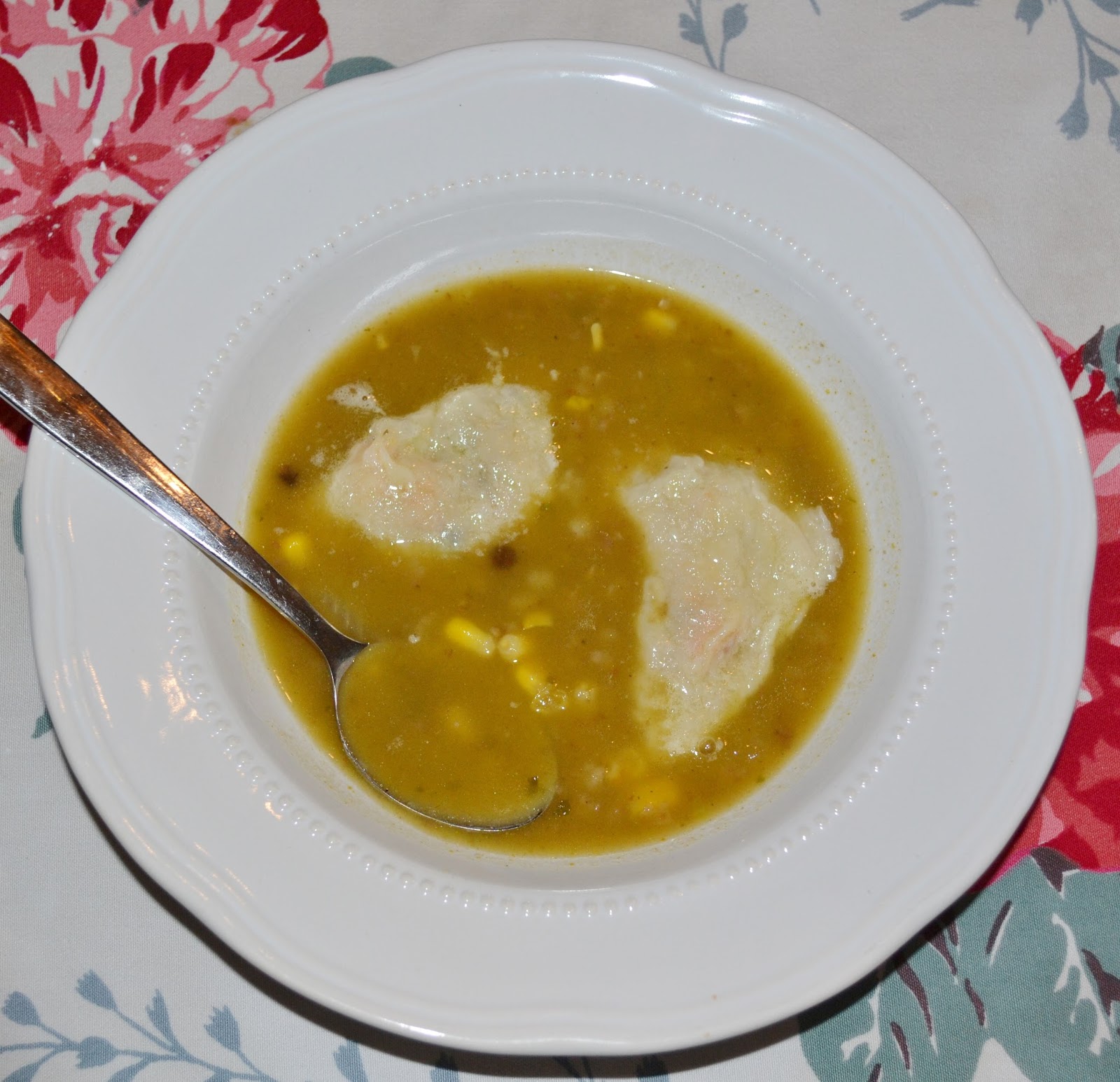 Kreplach dough is a version of egg pasta dough. It is a bit softer and hand rolled on a work surface. You can take a short cut, as my mother does, and buy pre-made won ton wrappers, place the filling, wet the edges with a bit of water and shape them as you would the hand rolled dough.  I'm attached to the process of making the dough for personal reasons - rolling it out on the same cotton tablecloth my grandmother used to cover her work surface.

Choreography:
Making several dozen kreplach will take the better part of 3 hours from start to finish. You'll cut out about half of the project by using prepared won-ton wrappers. 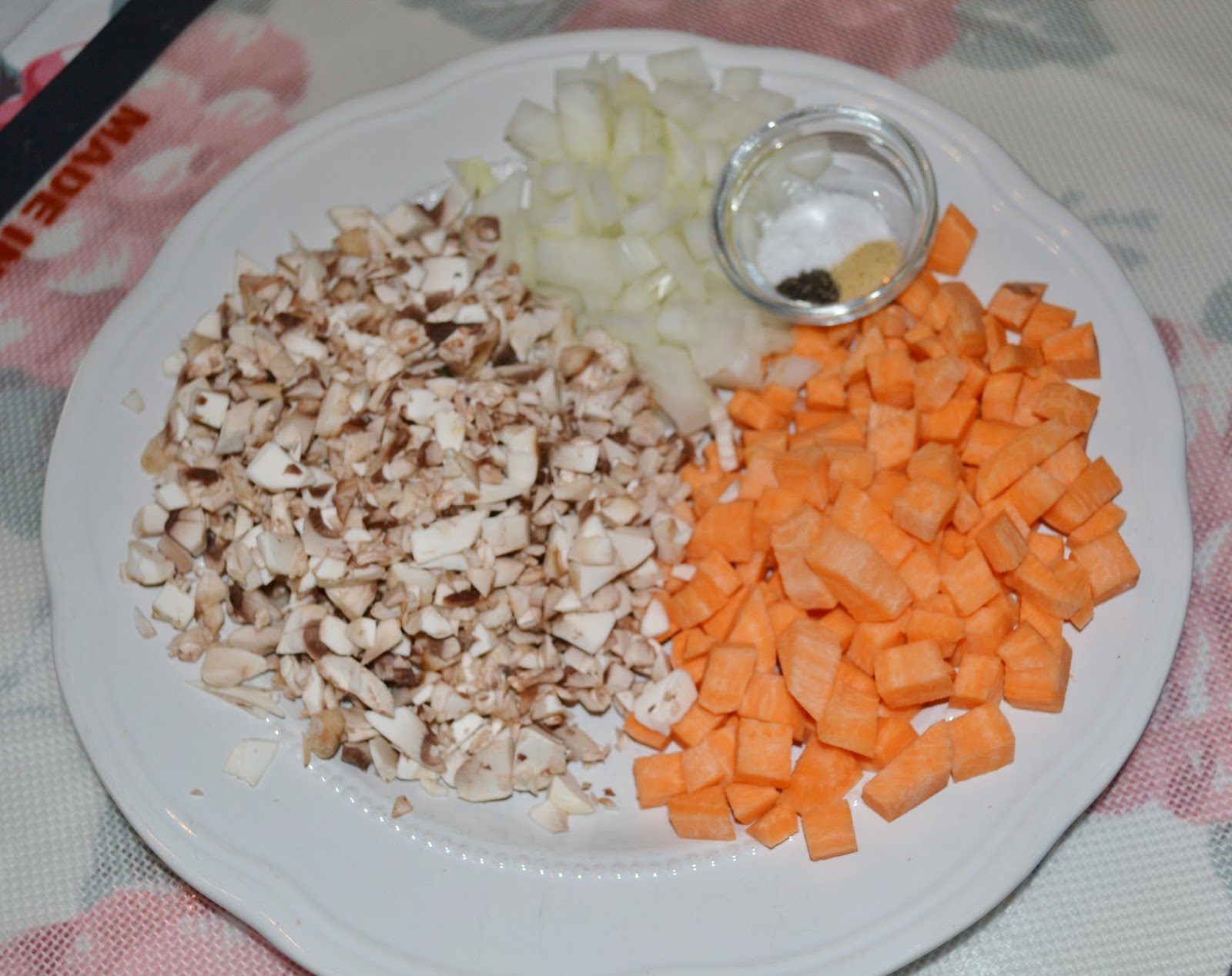 Procedure:
The dough:
1. Measure out the ingredients for the dough. 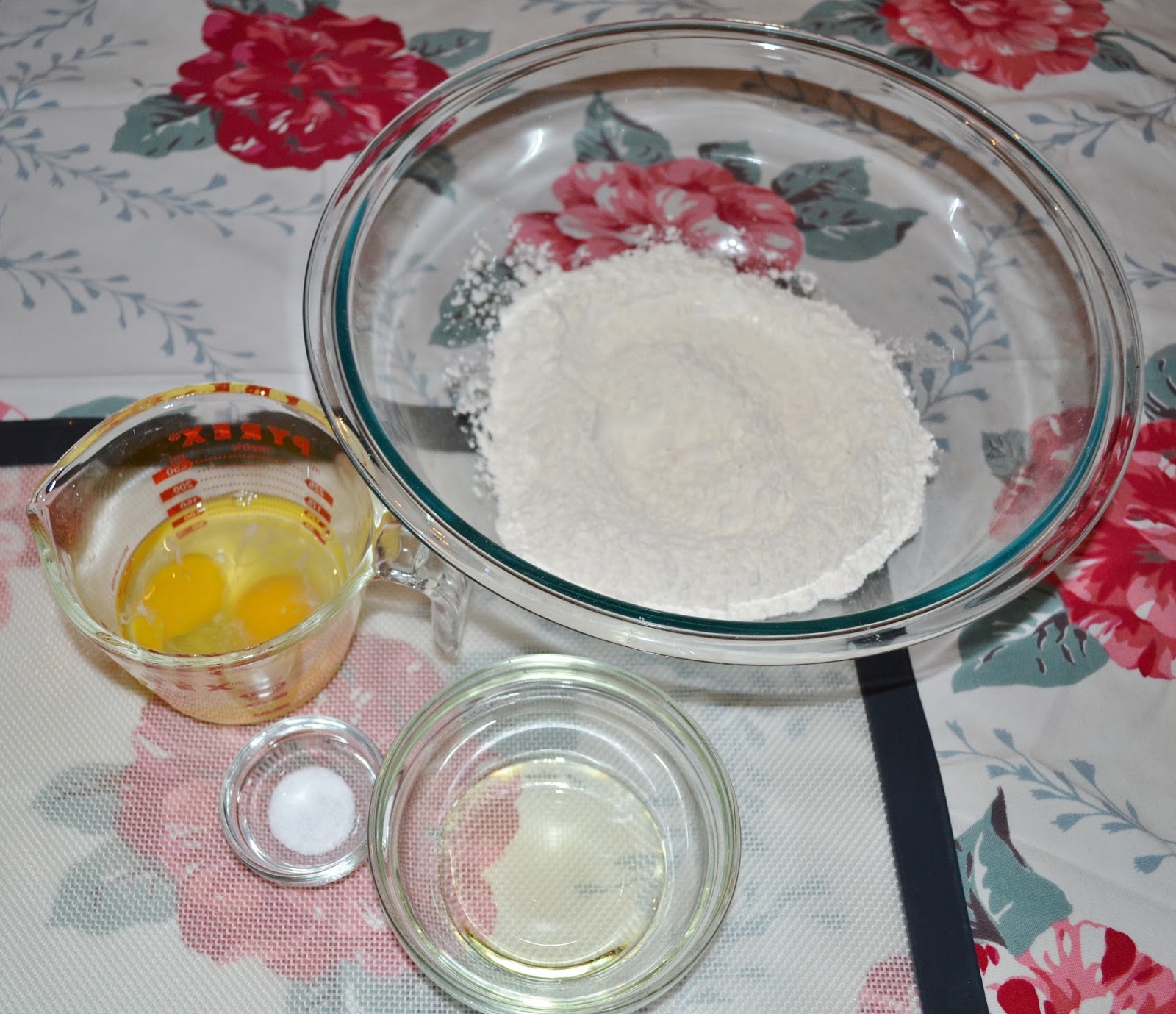 2. Pour the flour into a large mixing bowl and create a well in the center.
3. Combine the remaining ingredients and pour into the well.

4. Using a flexible scraper or silicone spatula push the flour over the egg mixture and start to mix until you have a ball of dough that holds together.

5. Cover loosely with plastic wrap and set aside. You do not want to handle the dough more than necessary.

The Filling:
6. Place the sweet potatoes in a skillet or deep frying pan with about a 1/2 cup of water. Bring to a simmer and continue to cook and stir for about five minutes. The water will evaporate, the potato pieces will be mashable. If they are not soft, add a bit more water and continue to cook.  Remove cooked sweet potato to a bowl in which you can hand mash it with a fork (you don't want to puree the sweet potato, but rather leave it roughly mashed).

7. Heat the oil in the same pan, add the onions and saute until translucent.
8. Add the mushrooms and continue to cook for an additional 3-4 minutes.
9. Add the salt, pepper and garlic and spoon the mixture into the mashed sweet potato.

10. Set aside and cool the vegetable mixture. Put the stockpot of water on the stove and bring to boil while you prepare the kreplach. 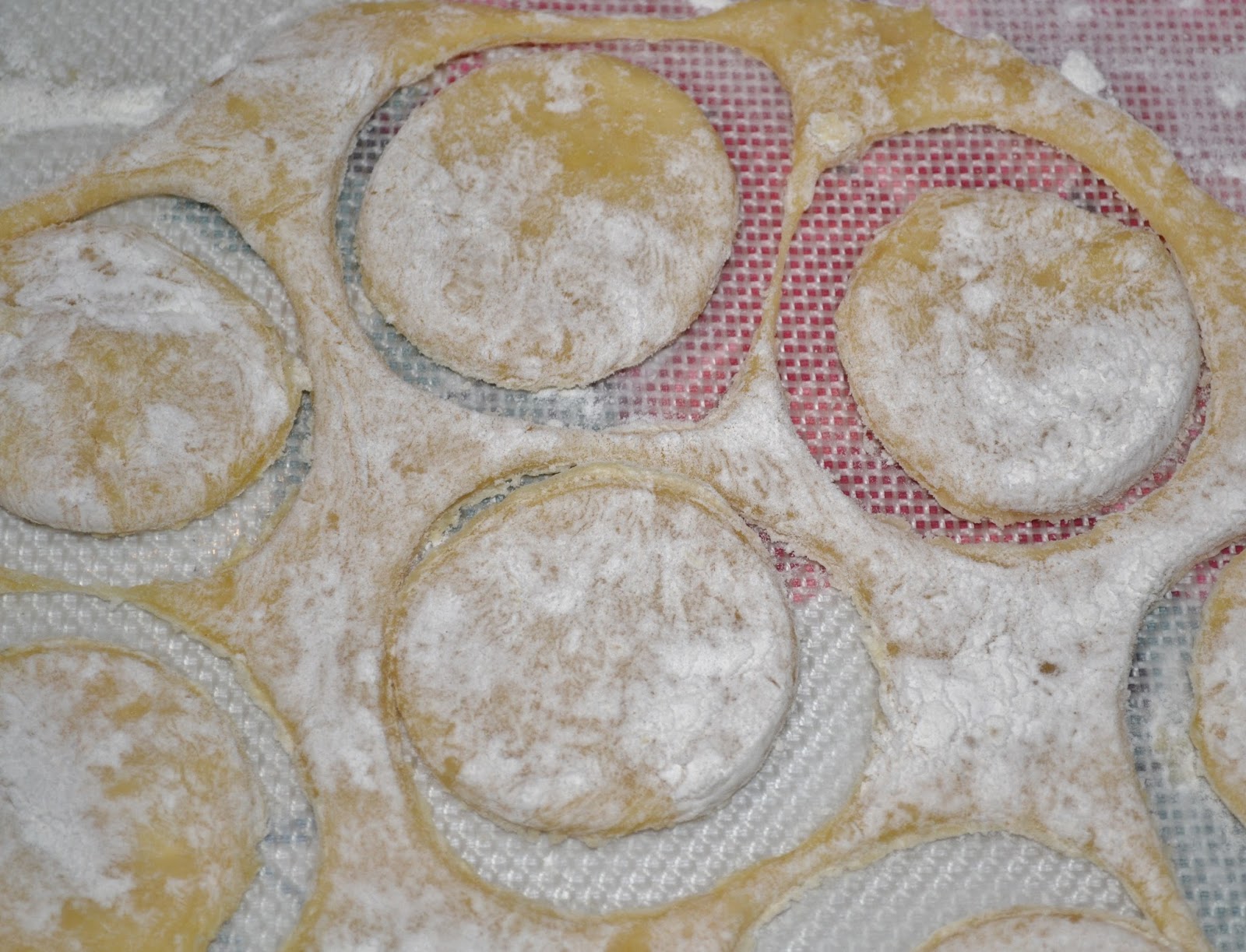 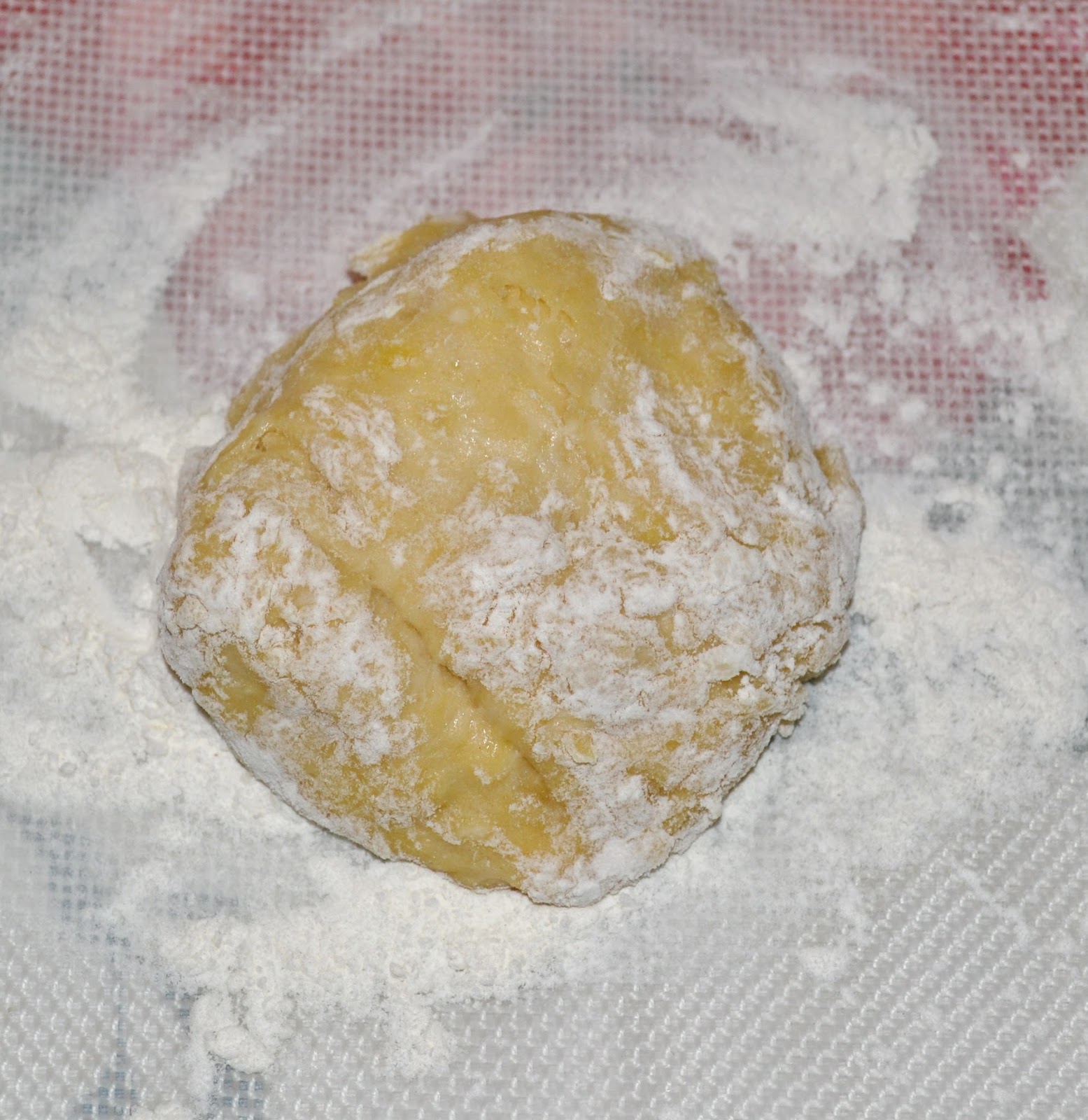 11. Uncover and divide the dough into four pieces. Remove one piece, keeping the others covered to avoid drying. Knead with a few quick turns.  Roll roll out on a lightly floured work surface to form a rectangle of dough, approximately 1/4 inch thick. Dust with flour if the dough begins to stick.  Cut out circles of dough, gather up the scraps and place them back in the bowl with the other pieces of  dough.
12. Take one piece of dough, stretch it a bit in your hand, place a spoonful of filling in the center. Fold one edge over the filling and press together with the opposite edge. Working around the sides, press the edges together, try to seal without air in the pocket. Pull the dough into a triangle shape and place on the plate dusted with cornstarch. Repeat until you've used all of the circles of dough.

13. Add the kreplach to the simmering water. Cook for 10-12 minutes. Use a large slotted spoon to remove to the greased plate.  Cool in a single layer.

14. Store the cooled, slightly greasy kreplach in a covered container in the refrigerator for up to 3 days or freeze, wrapping them in foil and then a zip lock bag, or in a plastic container.

15. To serve, place the kreplach on a slightly greased cookie sheet and bake at 350 degrees for about fifteen  minutes, until the edges dry out and begin to brown a bit.

16. Well wrapped kreplach freeze well; when you are ready to use them, defrost them and bake as above.