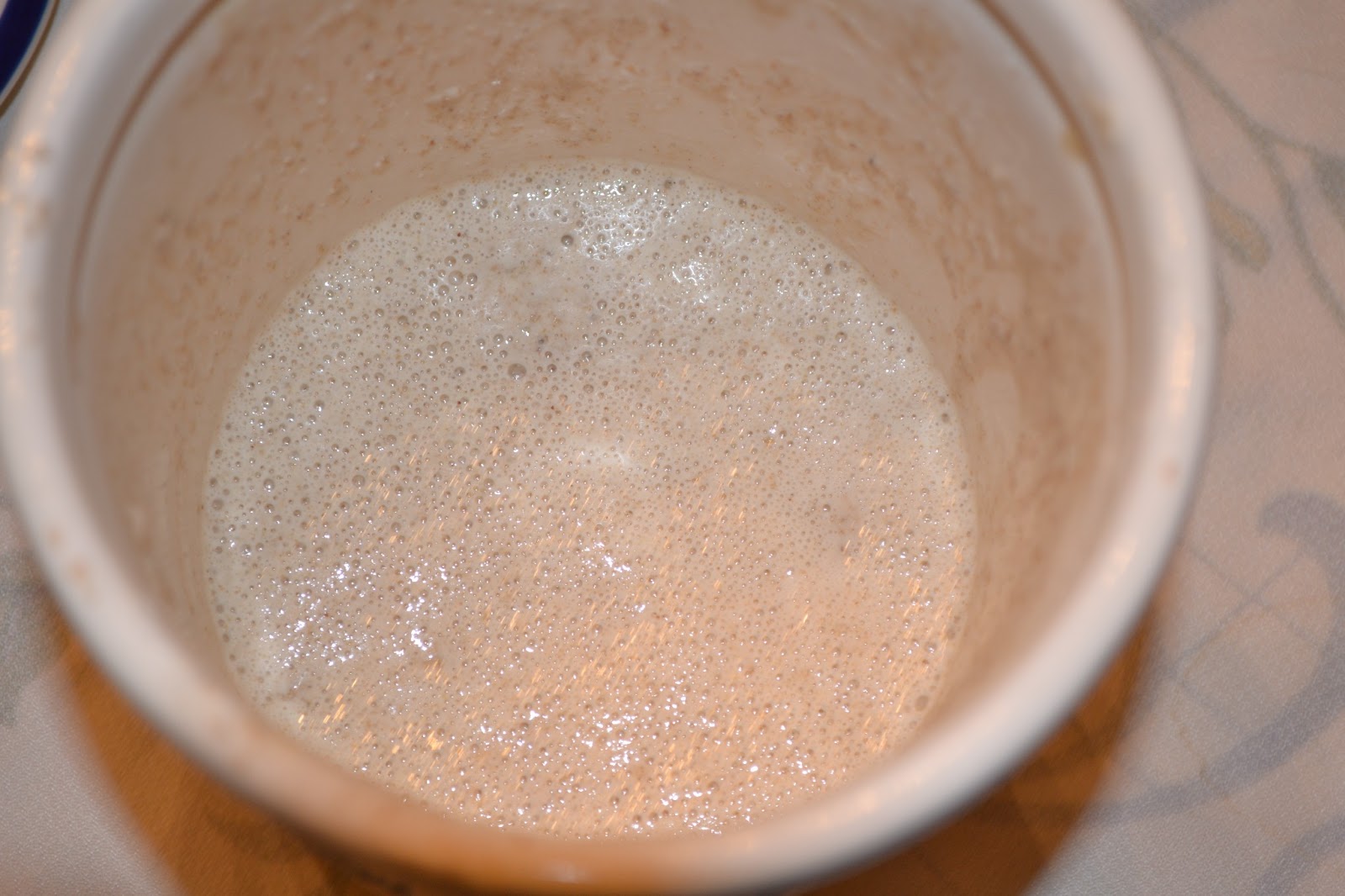 I am, admittedly, a novice at working with sour dough. I have had some fairly successful sour dough breads and I believe I understand the process and even some of the chemistry, but I know I have a long way to go. Sour dough starters generally make use of "wild" yeasts - yeast that naturally lies on the surface of flour, grape skins, air in your kitchen and other fruits and vegetables. I did find several recipes for sour dough starters that used cultured bread yeast, but there is no reason to do this- with patience you'll be able to coax a starter from nothing more than flour and water.

Starting and feeding a starter reminded me of how complicated, time consuming and important starters were to bread baking  in the not so distant past. Modern cultured yeast was not in production until the turn of the last century.

I believe that baking is something you learn as you go; therefore there was no need for me to master the entire art and science of sour dough and wild yeast before I start experimenting with this technique. I am encouraging you to try baking with a starter - you never know, you may find you love the challenge. I imagine that this process is somehow related to my son's interest in beer-making.

My daughter, Mikah, was in Denmark last year and mentioned a dark very heavy rye bread she ate there. I think I found this bread at Breads Bakery near Union Square in Manhattan, but germane to this posting is that I believe this bread requires a sour dough starter.

This is the second winter I've started a sour dough starter. Our kitchen is way too hot in the summer to bake very often and I was busy with the garden, so I discontinued the starter I was nursing along last winter/spring. The starter I used this week is about two months old. It lacks heritage, but I baked a very respectable "Korn Bread" (a type of rye bread that has no corn in it) this week using the starter. I will be uploading the photos and recipe for the Korn Bread in another posting.

At some point I may be comfortable enough to know how to create starters with subtle differences, but at this point it's a success to me to feed and keep one starter going.

If you are reading bread baking books you may notice a few techniques using dough preparations that are mixed and allowed to ripen (pre-ferment) prior to mixing the entire batch of bread dough.  Sour dough starter is one of these pre-ferments; it is a ripened paste of flour and water that has captured wild yeast from the surface of the flour and the air in the kitchen. A sour dough culture takes about a week to "build."

The following method is a digested version of several sources. I've worked out a simplified method of attending to the starter and bread baking around my work schedule- meaning that I "bake" (or engage in baking-related activities) early in the morning and after dinner. Because I have almost always been a working mom and I've wanted to bake, I've worked out a schedule that allows me to bake "around" my work day: early morning and after dinner.

The starter needs to be attended to on approximately 12 or 24 hour cycles, so if you start it at 7 am on day 1, the next time you attend to it will be either 7 pm on day 1, or 24 hours later at 7 am on day 2. You'll need rye flour or a combination of rye and unbleached all -purpose flour for your starter. Don't worry about yeast, the flour has yeast on it, rye flour also has sugars that are more easily fermented than wheat flour.  Water should be de-chlorinated, meaning that you should fill a glass of water and let the chlorine evaporate over a 12 hour period or use room temperature filtered water from your Britta.

Mix your sour dough in a non-reactive container: a ceramic crock, very large glass jar or a stainless steel bowl. Use a wooden spoon or silicone spatula to mix the starter.  The process of fermenting this pre-dough will produce lactic acid and acetic acid. The mixture will be bubbly and smell yeasty, it will have a color similar to oatmeal, although it will have the consistency of a thick gluey mass when you mix it. When you "feed" the mixture with flour it will look lumpy; however, after several hours the lactic acid will help smooth out the mixture to resemble a thick smooth gluey mass.  In a healthy active starter the liquid should not separate from the solid portion.  If the liquid begins to look dark grayish and the smell is very sour and unpleasant, throw it out and start again. I did have a batch of sour dough starter go bad last year, for reasons I could not figure out. After searching the internet, my husband,Fred,  suggested that  I contact the Bakers Hot Line at KA Flour and the baker that answered my e-mail said that the starter may have spoiled and that it should be thrown out.

NOTE: Sour dough is living and breathing, don't store or let rest in a sealed jar (with a screw cap). Carbon dioxide gas is being produced and you don't want to create a mess on your counter or in the refrigerator.

Temperature and hydration affect the culture. The balance of the yeast and bacteria create a good sour culture and there are times when the  the two types of organisms will fall out of balance.  The flavor of the sour dough itself is affected by the temperature, hydration and bacterial colonies that inhabit the flour. The ambient temperature of the room or space where the culture is resting will affect the taste of the culture. Cooler, slower proofing will result in a more "sour taste."  Not all "sour dough" breads need to be sour, they will create a wonderful chewy textured bread or bread-type product anyway (think: pancakes, muffins and biscuits).

Recognize that this technique is thousands of years old; ancient bakers didn't have a degree in chemistry or food science when they discovered this cooking method. You too can make sour dough successfully - have fun and experiment (and keep giving away samples).