Some things to know about measuring flour and working with yeast

- February 03, 2013
A bit of what you need to know about kneading :
get yourself a scale to weigh flour and some other ingredients
(say it three times fast and then make sure you do it) 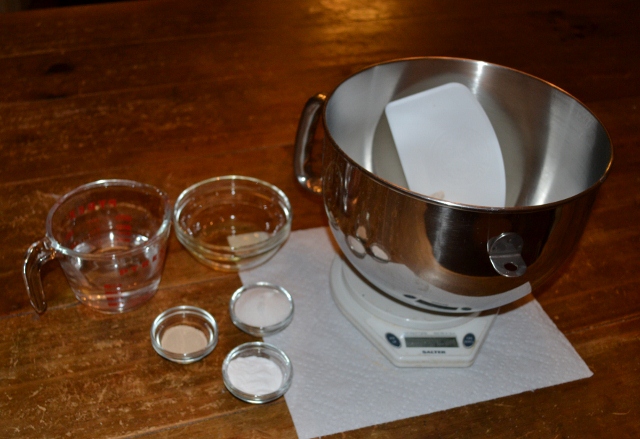 Flour:
You want to measure flour when you are using more than a tablespoon for two.  You know that I am not inclined to be exact in many of my activities, but this is important.
Flour differs - not only type and brand, but most importantly for the success of your baking,  how dry or humid your flour is. This factor differs at various times of the year and the conditions under which the flour was grown & milled.  So invest in a digital scale, the same way you would a measuring cup or measuring spoons.

If you have measured the ingredients and kneaded the dough and it's still sticky, flour your hands before you start adding additional flour to the dough. Be judicious about continuously adding flour, the end product might be too heavy and dry.  Remember, as well, that during the proofing the flour will continue to absorb liquid- so work against your instinct to add more flour - especially if you have weighed the flour.

If you just refuse to weigh the flour, don't dip the measuring cup into the flour, you'll pack the flour and, knowing from experience, that the "cup" of flour you dug out of the yeast bag can weigh 6 or 7 ounces, you'll mess up the recipe. "Fluff up the flour with a cup, and gently fill a measuring cup (not a glass measure, use those for liquids). Take the flat edge of a knife or dough scraper and bring across the top of the measure.  If you want to prove to yourself that this is close to 5 oz, go ahead, I tested myself a few times to see if this was real.

Hand kneading is not an attack on the flour, you're looking to incorporate ingredients & air, stretch the gluten in the flour and prepare the mixture to proof. Use the heal of your hands, once or twice in the same direction, the dough will start to form an oblong, fold it back over itself to re-form in a roundish shape and keep repeating. Dust the work surface, especially at the start so that dough won't stick.  4-5 minutes of this repetitive motion is usually enough, especially for dough that will get a long rise on its own. If it doesn't feel stretchy, knead it another couple of minutes. Don't knead dough made with bread flour by hand, you won't be able to get the higher gluten flour really going. Use an electric dough hook for the high-gluten flours.

After kneading, grease the bowl you initially mixed the flour in. I cannot imagine for the life of me why you have to grease a clean bowl to proof dough- the yeast and flour that was in that bowl, and the remnants left in the bowl after you turn out dough onto a board cannot possibly interfere with the proofing. It's like using a million pots to make a particular dish rather than cooking in stages and not making a huge number of dirty pots and utensils to clean. A sink full of dirty bowls is enough to make me want to forget baking.

Grease the bowl with a tablespoon or two of oil, turn the dough over and around so that the outside is covered with an oily film and use plastic wrap to cover. The wrap can lay against the dough, no need to leave an airspace by attaching it to the top of the bowl - you are doing nothing more than leaving an air pocket to dry the dough and allowing additional space to loose the heat that the yeast is generating as it ferments. The wrap will rise around the dough as it proofs.

Yeast:
Yeast is a single cell fungi - there are hundreds of types of yeast-  it's everywhere, including in bags of flour and on the skin of grapes (interesting connections to the ancient world). It's needed for fermentation (Eli - beer!) and bread making.

The few forms of baking yeast used are described as- fresh/compressed (hard to work with, de-activates,  harder to find these days), active dry (in packets, jars and by the pound), rapid rise (I don't like using rapid rise),  instant (in larger packages by the pound).  "Wild yeast," can be "caught" by mixing flour and water and left out on your counter to ferment. Grape skins can also be used to gather wild yeast.  This type of baking (sourdough) is a partially different and more time consuming process.

Yeast both requires and over-activates itself by consuming carbs (sugar) and has its growth regulated by both sugar and salt in bread recipes.  Oils and fats (including eggs, which have fat content) will inhibit it's growth.

Yeast is activated by the introduction of water and aided by the addition of a bit of sugar or other carbohydrate (flour, for example).  It likes to replicate in warm conditions, which leads to a whole other dicussion on health problems (not the same yeast).

Baking yeast is actually engaged in a few processes as it ferments. The carbon-dioxide that is released during fermentation stretches the dough (stretching strands of gluten - the protein that forms gluey-strands that allows dough to stretch and makes gluten-intolerant individuals sick).  Another by-product is alcohol and acid, all which tenderize and create a texture to the dough and baked bread.  The third important component that yeast adds to bread baking is flavor and aroma- but like sugar and salt, there is such a thing as too much of a good thing - too much yeast is not pleasant.

My recipes use active dry or instant yeast.  They are both measured the same way.  My preference is for SAF instant yeast, but that has more to do with convenience than a belief that the resulting product differs with the use of instant yeast. SAF gold is an instant yeast with added citric acid. The citric acid boosts the activity of yeast in the presence of high-sugar content. Once you open the package, keep all yeast well-wrapped,dry and chilled. Dry yeast keeps well for prolonged periods of time when stored in the refrigerator.

Instant yeast, as the name implies, instantly mixes with liquids, flour, sugar and salt. There is no "proofing" required.  Active dry yeast however should be activated prior to mixing with any other ingredients.  The proofing process adds about another 10 minutes to the dough making process. Measure the water and  1 Tbsp sugar and mix with the measured amount of yeast. The water must be warm - about 110 degrees in order to activate the yeast. The yeast will begin to bubble almost immediately and in about 5 minutes it will look like a grayish bubbling mass. At this point the yeast is ready to be worked into the flour. I have found that instant yeast prefers that the water temperature be a bit cooler, 100- 105 degrees.